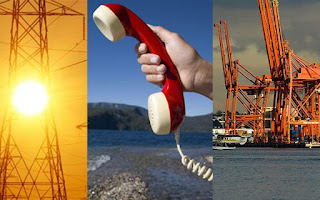 Government and trade union movement to sign next Wednesday the framework agreement policy, which would be a navigator for…
the renewal of several collective agreements, covering a few thousand workers who are employed in semi-governmental organizations and the local government. The signing of the agreement announced yesterday by Finance minister Harris Georgiades, with statements on national radio, explaining that the formula will apply for the concession of enhancement is that which has been agreed with the trade unions SEK and PEO, and is the same setting that was provided for in the bill on the state payroll, i.e. the interconnection of the payroll in the course of the economy.
Referring to the concession price increases and the abolition of the emergency levy, mr Georgiadis noted that this will be done after a few years, employees in the public, semi-public and private sector will get some increases and reductions due to the good management of the financial and economic recovery, he said.
More specifically, the collective agreements expected to be renewed will be of four years duration and will be for the period 2015-2018. As known, the framework agreement, which was concluded in August of 2015, had to temporarily put it in the drawer of the Ministry of Finance, as it was in progress in the House the debate on the bills for the reform, including the state payroll.
The signing of the agreement is expected to pave the way for improvement of wages for the period 2017-2018, since, as known, for the period 2015-2016 the trade union movement had consented to a non-concession increases.
The trade unions (PEO and SEK) in the semi-public, repeatedly has stated his decision to a claim for enhancement and restoration of rights. The decision was reaffirmed yesterday by the c.c. the PEO Î Î¬Î¼Ï€Î·Ï‚ Kyritsis, who said that I claimed increases of around 3%. On the basis of the agreement, he said, employees in the broader public sector are entitled to increments, and the formula interface of the wages with the change in the economy, there is a margin of 3% to a claim for general increases.
The c.c. PEO, who also spoke on the state radio, he also mentioned that the Î£Î—Î”Î—ÎšÎ•Îšâ€“PEO intends to claim increases, with particular emphasis on improving the remuneration of low-paid workers, whose salary does not exceed â‚¬1500 per month.
In January it is expected that the minister of Finance will submit to the Cabinet a draft law which proposed the extension of the policy of a freeze on recruitment.
Source