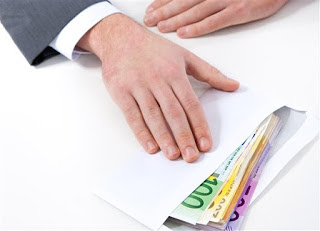 A judicial investigation is in progress for Ï…Ï€ÏŒÎ¸ÎµÏƒÎ·Î±Î½Ï„Î¹Ï€Î¿Î¯Î·ÏƒÎ·Ï‚ authority and…
illicit enrichment, starring shifty distracting amounts of money by making use of names of political persons.
Already there is evidence of coil rogue that misleads citizens, asking them to pay for services of any kind, on the basis of alleged personal contact with politicians. The scam is based, of course, the entrenched belief that cronyism is alive and well…
The case came to light following complaints from citizens, with a typical case of involvement of behalf of the Ï€ÎµÏÎ¹Ï†ÎµÏÎµÎ¹Î¬ÏÏ‡Î¿Ï… of Attica Rena Î”Î¿ÏÏÎ¿Ï… and not only. However, it is worth noting that in the last few months there has been an increase of cases Î±Î½Ï„Î¹Ï€Î¿Î¯Î·ÏƒÎ·Ï‚ authority for ensuring economic benefits of individuals who promise favors.
It is indicative that the end of September the competent services of the hellenic food authority reported the illegal activity of strangers who claim a working relationship with the operator. As pointed out by the FDA the free-riders were close to businessmen asking for their money to ensure that you will avoid criminal and administrative sanctions with regard to alleged irregularities in their businesses.
A similar case, with a focus on the Attica Region, has received in the way of Justice. On Monday, the lady Î”Î¿ÏÏÎ¿Ï… issued a statement in which he says that they were put in mind of the written reports and citizens ‘ complaints “about the existence of a gang of crooks who try to extort sums of money and other property benefits of citizens, making use of its name and the names of other politicians”.
Yes, it describes two specific cases of people, strangers, as you pointed out, that:
* one is recommended as supposedly a personal friend of hers and asks for a fee for an alleged service-related services of the Region of Attica
* else appears to have testified falsely in court that supposedly is a consultant and partner.
The lady Î”Î¿ÏÏÎ¿Ï… stresses that both cases have gotten in the way of Justice, and calls on citizens not to trust this kind of cheats and to immediately seek the intervention of Justice.
Notes that the citizens should not be lured by ÎµÏ€Î¹Ï„Î·Î´ÎµÎ¯Î¿Ï…Ï‚ cheats not to give credence to what they claim. And that, “not only because I do not know the above persons, but because even I knew, it is obvious that I would never allow such actions, mediations, etc.”, reports to the district governor. The administration of the Region of Attica, in accordance with the lady Î”Î¿ÏÏÎ¿Ï…, “I don’t operate on the basis of personal acquaintances, I don’t do favors to “friends”, “acquaintances” and crony” but it works, and decide “solely on the basis of good administration and service of the public interest”.
Source