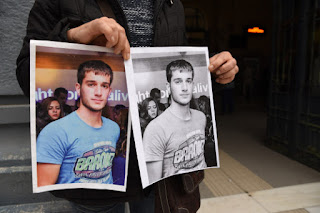 Next Monday 20 October is expected to start the trial for the case of Vangelis Giakoumaki, after the bullying that he suffered in the Dairy School…
of Ioannina was found dead with slashed wrists in a field a little farther from the facilities of the school.
One of the persons who had taken a public position the journalist and screenwriter, Elena Akritas, as the same had revealed, was to testify on the case of Vangelis Giakoumaki the authorities are expected to give the present to the Three-member Court of Misdemeanours of Ioannina. Thus, according to the newspaper Freddo, Elena Akrita is expected to be found in the city of Ioannina, next Thursday.
Elena Akrita had remarked from the first moment of finding of the body of Vangelis Giakoumaki from the first moment that in each case there are responsibilities of many, even if it is a suicide, by showing as a responsible those who brought the bullying but also those who allowed for it.
â€œA crime or a suicide? If the second, who led Vangelis to the death are not killers?â€
Yes, the Helena Ranger had immediately request the intervention of the then minister of Public Order, writing that â€œThe child of Ioannina, mr. Hollywoodâ€.
In the dock will sit, the former director of the school and the supervisor of the outbreak of the defendants for breach of duty, as essentially they put up with the behavior of â€œhard Creteâ€ which practiced violence at the expense of Vangelis Giakoumaki, but the ex-minister and member of parliament Christos Markogiannakis, who had reportedly intervened in the address of the school for the mild treatment of a student who faced disciplinary action.