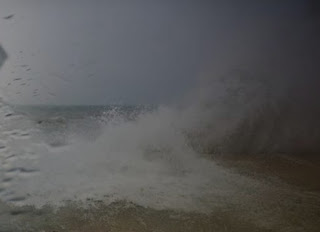 Alert is the state of the island, because of the new wave …
bad weather, which scans the island for the last twenty-four hours.
Strong storms are marked by noon Thursday across the island, while gale-force winds that reach up to 10 on the beaufort scale, they kept it tied up ships in the ports of Crete.
However, this morning, allowed the departure of the ships from the port of Heraklion.
The intensity of the weather events are going to intensify today with sleet and strong storms are the main characteristics of the weather today, while the evening hours are expected snowfall.
Heraklion
With name of to all the co-competent services, the independent office of Civil Protection of the Municipality of Heraklion is to inform, in accordance with news flash.M.Y., for deterioration of weather conditions, with strong rains, gusty winds, thunderstorms, snowfall and frost from Friday 6 January 2017 to Sunday 8 January. Alongside calls for increased readiness of staff and equipment engineering services for response to incidents of emergency. Also informed the residents in order to put in readiness the network of volunteers in each area.
Chania
The Civil Protection Department of the Regional Unit of Chania, after the bull of deterioration of the forecast issued by the national WEATHER service, recommends its citizens to avoid unnecessary travel during peak events (heavy snow, icing conditions, heavy rain) in mountainous and hilly areas, due to the risk of the road network and inability of execution of works of construction machinery at these times.
As long as it is absolutely necessary to move with car, you need to:
â€¢ To be informed about the weather and the condition of the road network.
â€¢ Use snow chains where required.
â€¢ To move with low speed.
â€¢ To move around during the day, to prefer main roads, and to inform their relatives about the followed path.
â€¢ To ensure that the car is stocked with enough fuel.
â€¢ Do not hinder the work of the machinery that carry out ÎµÎºÏ‡Î¹Î¿Î½Î¹ÏƒÎ¼Î¿ÏÏ‚.
â€¢ In the event of a storm, to immobilize the car to the side of the road away from trees and power lines.
Finally, we note that the services of the Regional Unit of Chania are ready to tackle the phenomena, but the work of snow and remove any result of the activation will be carried out during the times of recession phenomena as apart from pointless judged and dangerous for the operators of the machinery.
Lassithi
Please citizens of the Prefecture of Lasithi, due to the deterioration of the weather provided by the WEATHER service until Monday 9-1-17, to be especially careful, ensuring the adoption of measures of self-protection from dangers arising from the event of intense weather phenomena.
In particular: â€¢ To insure objects which, if they are overwhelmed by the intense weather conditions may cause destruction or injuries.
â€¢ To ensure that the gutters and the gutters of the houses are not clogged and work normally.
â€¢ Avoid crossing streams and streams, on foot or by vehicle, during storms and rainfall, and for several hours after the end of the event.
â€¢ To avoid the fieldwork and activities in marine and coastal areas during an event of intense weather phenomena.
â€¢ Take shelter immediately during a hail. To take refuge in a building or in a car and not have to leave the secure area, but only when they are satisfied that the storm has passed. The hail can be very dangerous for the animals.
â€¢ To avoid passing under large trees, down posted signs and generally from regions where light objects (e.x. pots, broken windows, etc.) can dislodge and fall to the ground (e.x. down from balconies).
â€¢ To faithfully follow the instructions of the local competent bodies, such as road Traffic etc. Also, in areas provided for the event of snowfall and frost:
If you are going to move with the car: â€¢ To be informed about the weather and the condition of the road network
â€¢ To have in their vehicle snow chains and the tank full of fuel
â€¢ To travel, if necessary, preferably during the day, preferring the main streets
â€¢ To inform their relatives for the route to be flown â€¢ To alter the programme of their movements in order to avoid the peak of the weather phenomena
â€¢ To faithfully follow the instructions of the local competent bodies, such as road Traffic etc. If you move on foot: â€¢ dress in several layers of light clothes instead of one heavy item of clothing and to wear appropriate shoes to avoid injuries due to slipping
â€¢ Avoid unnecessary travel during peak events (heavy snow, freezing conditions) The farmers and the breeders to follow the instructions of the Directorate of Rural Economy and Veterinary medicine.
Especially for livestock farmers in the Prefecture of Lasithi and in particular in the mountainous and semi-mountainous areas to prepare for the event of exclusion of the flocks and of their own, from a heavy snowfall, especially in mountainous areas, you will need: To have been stored near the stockyards the feed, sanaa or prepared mixtures of feed or other feed, which will be able to meet the needs of the animal feed for about 15 days as well as stored water.
You need to be prepared and to cover their own needs, to take care of to have food that is easily serviceable, water, medicines and the necessary tools for clearing the site of snow.
To also have a mobile phone with charger and extra batteries. To have with them a radio with batteries, and be informed by the local MEDIA in order to stay updated on the weather forecast the excluded areas and the instructions of the authorities.
To follow faithfully the instructions of the local competent bodies, as Municipality, Directorate of Rural Economy and Veterinary Regional Unit of Lasithi, Police etc.
Source