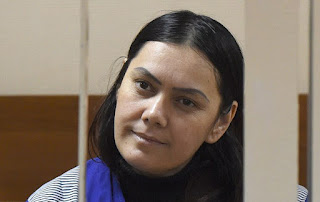 Can the same saying that Allah ordered her to decapitate the child…
and the Russian media to attach to the gruesome crime in the schizophrenia from which he allegedly suffers, however, according to the british newspaper Telegraph, the nanny killer of Moscow not act alone.
According to the newspaper, someone gave a mandate to the “bloodthirsty nanny” to kill the kid who had to take care of. And yet, officials investigating the case have reported that it is very likely that the instigators of the murder are still ÎµÎ»ÎµÏÏ„ÎµÏÎ¿Î¹ and expressed their conviction that the 38-year-old had any accomplices in the crime.
The ÎŸÏ…Î¶Î¼Ï€Î­ÎºÎ± Î“ÎºÎ¿Ï…Î»Ï„ÏƒÎ­Ï‡ÏÎ± ÎœÏ€Î¿Î¼Ï€Î¿ÎºÎ¿ÏÎ»Î¿Î²Î± was arrested Monday by the police near a subway station in northeastern Moscow while he was walking, holding the severed head of a little girl, screaming that he is a “terrorist”.
Today, the 38-year-old was brought before a judge who ordered the detention until 29 April on request of investigators.
“This was ordered by Allah to do”, told reporters upon her arrival at the hearing.
Locked up in a cage, in accordance with the practice followed in Russia, the ÎœÏ€Î¿Î¼Ï€Î¿ÎºÎ¿ÏÎ»Î¿Î²Î± made incoherent statements, complaints and prophetic words, just before the start of the hearing.
“Allah sends the second prophet to bring news of peace, good morning, everyone. I’m hungry, I’ll die in a week, this is the end of the world, I was forbidden to eat. Hello everyone,” she said and completed her statements before greet the journalists.
The justice began an investigation into the murder of a small child, while the Russian media Î´Î¹ÎµÏÏ‰Ï„ÏŽÎ½Ï„Î±Î½ the incentives of ÎŸÏ…Î¶Î¼Ï€Î­ÎºÎ±Ï‚ which they call the “bloody nanny” and about sometimes “deranged” former “terrorist”.
The nurse of born the 2011 infant wait for parents to leave the apartment, and then, for unknown reason, injuring the child in the neck, divided the head from the body, before he went to the station holding the head, according to the report of the investigator presented to the court.
However, until today, has not been established the existence of any accomplices or persons who prompted her to commit this crime”.
Still, the researchers submitted the ÎœÏ€Î¿Î¼Ï€Î¿ÎºÎ¿ÏÎ»Î¿Î²Î± in psychiatric examinations. It is not excluded that it acted “under the influence of psychoactive substances or drugs”
Source