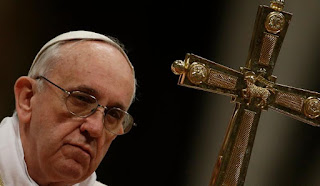 Pope Francis announced to the crowds that congregate….
in the Square of St. Peter, that this Christmas could be the last for mankind.
In the revealing speech, Pope Francis described the existing chaotic state of the world and said that it marked the beginning of the “end times”, and by new year the world is likely…. to be completely unrecognizable. The Î Î¿Î½Ï„Î¯Ï†Î·ÎºÎ±Ï‚ hinted, in essence, that will start the C World War, noting that this year’s Christmas season will basically be a “travesty”, as stated in the church of Santa Maria in December.
“We are close to Christmas. There will be lights, there will be festivals , bright trees, and even ornaments while the world continues to wage a brutal and bloody war, ” said he. Finally, Pope Francis also stated the views of those at the Weekend, telling the crowd of faithful Catholics in central square that, “while the world is starving, and chaos is widening, you need to realize that this year’s Christmas celebrations for those who choose to celebrate, may it be the last.”