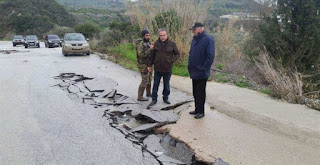 Their wounds count Chania after the severe storm that struck on Saturday, the prefecture of leaving behind the images of biblical destruction…
This morning crews from the municipality and the region will be out in the affected areas to start the recording of the damage.
According to estimates of the damage reach one million euro.
As of today the applications
From the Municipality of Platanias are invited by the Residents of D.E. In kolimbari and Platanias, the houses and the appliances of which have been affected by the extreme floods and the heavy rainfall that occurred the morning of Saturday 11 February, as applying (outlining the damages that were proven by attachment of photographic material while it should be necessary: name, father’s name, postal address and phone contact) to Friday 17/02/2017, to the appropriate Control Panels of the Municipality in order directly to carry out autopsies, and to document the damages relating to their homes, so then those areas of the Municipality be declared â€“ on the basis of the procedure specified by the legislation â€“ as flood victims, and to provide compensation for the Residents affected.
For the D.E. Platanias, the residents will attend the city Hall of Platanias (the Geranium), while for the D.E. Kolymbari will attend at the municipal shop (former town Hall) in Kolymbari.
Also, on instructions from the ELGA, farmers, producers and growers who have suffered damage to the livestock (e.x. sheep, goats, etc.) and in the plant chapter, you will have to declare today, Monday 13 February, the damage to the correspondents of the ELGA, the local municipal stores of the Municipality, while those who have suffered damage to the fixed capital (livestock units, sheep-pens etc.) they can submit claims for compensation to the correspondents of the ELGA in the local municipal offices until Friday, 17/02/2017.
Contact numbers City per Municipal Section:
D.E. Platanias: 28213 40018.
D.E. Kolymbari: 28243 40100.
Count their wounds
It is recalled that the torrential rain started at dawn on Saturday and stopped in the late afternoon. 12 hours was enough to… flooded the city.
The biggest, however, a problem was presented to the Kolimbari municipality of Platanias, in Chania prefecture.
As has already been written cretapost, from the heavy rainfall caused extensive damage to the road network of the municipality â€“ municipal and provincial â€“ while in a great many points have been particularly dangerous landslides.
At the same time on Saturday morning, the vice governor of Chania, Apostolos Î’Î¿Ï…Î»Î³Î±ÏÎ¬ÎºÎ·Ï‚ together with the mayor of Platanias, Giannis ÎœÎ±Î»Î±Î½Î´ÏÎ¬ÎºÎ· visited the affected areas. Mr. ÎœÎ±Î»Î±Î½Î´ÏÎ¬ÎºÎ·Ï‚ asked on the one hand, mr Voulgarakis to proceed immediately with the necessary procedures in order to declare the D.E. Kolymvari Ï€Î»Î·Î¼Î¼Ï…ÏÏŒÏ€Î»Î·ÎºÏ„Î· area to be able to compensate people affected by the natural disaster and secondly to provide emergency funding to the Municipality for the rapid restoration of the huge disasters suffered by the road and other infrastructure.
Source