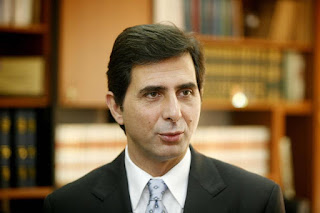 “Alexis Tsipras turned out to be completely incompetent. ÎšÎ±Ï„Î±Ï‡ÏÎ­Ï‰ÏƒÎµ the country. Committed and future generations. He and his government…
pledged that by 2018 it will take additional measures because there will be a fiscal gap.
ÎœÎ¿Î¹ÏÎ¿Î»Î±Ï„ÏÎ¹ÎºÎ¬ blame the bad lenders. The issue is what do we do? Good lenders, bad lenders, they are. With them, you have to come to an understanding.
It’s the government that breaks the reliability of Greece”, he said, among other things, today in the show of SKAI “front Line” member of Thessaloniki Konstantinos E. Î“ÎºÎ¹Î¿Ï…Î»Î­ÎºÎ±Ï‚.
“We repeatedly asked the understanding and cooperation on issues of major importance. Mr Tsipras, however, constantly was deaf. Even in national issues. Now he asks for consent! Now that the government is in a tough spot and I don’t know what to do. Now isolated from everywhere, both at home and abroad.
The New Republic part of the communication game of mr Tsipras’s not going to happen!”, stressed the mp for Thessaloniki.
“The money that he’s handing out mr Tsipras’s left from where? From the over-taxation of the Greek people? By the state which does not pay anything to anyone? Of those who committed and from future generations? From the money of the new taxes that brings mr Tsipras in less than a month?
The government of SYRIZA-ANEL believes that the only way is taxation, trapped in obsessions.
We will not follow the same policy. Is there another policy. Just like there was in 2014, when then we have reduced the VAT on feeding from 23% to 13%, when reduced by 30% the extraordinary solidarity contribution, when we have reduced the special tax on heating oil.
This is the proposal of the New Republic. Less taxation, reforms, privatisation,” he concluded.Î“ÎºÎ¹Î¿Ï…Î»Î­ÎºÎ±Ï‚.