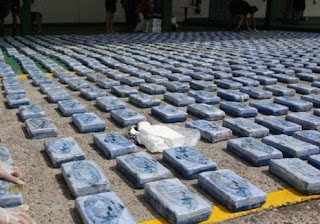 Scoop out the operation to combat drug trafficking in Ecuador, where they found and seized 3 tons of cocaine carrying vessel, which had…
ability to be submerged in part, at the maritime border with Colombia, in the Pacific Ocean…
The business, which they conducted jointly by the armed forces of Ecuador and the Colombian police, resulted to arrest a “makeshift” boat a machine which was damaged.
The huge amount of cocaine was destined for the united states, while during the operation were arrested three Colombian nationals.
In a post on Twitter, the minister of Interior of Ecuador, JosÃ© Serrano, pointed out that the authorities have confiscated 78 tons of cocaine from the beginning of the year.
According to the most recent report of the United Nations Office for Drug Control and Crime Prevention (UNODC), which was made public in October, the Ecuador is considered to be no longer a country where there are illegal crops of coca, and which is not recorded drug trafficking.
On the contrary, Colombia is the country with the largest production of cocaine in the world, which amounted to 442 tons in 2014, according to the UN, a quantity of which was increased by 52% compared with the previous year.
Source