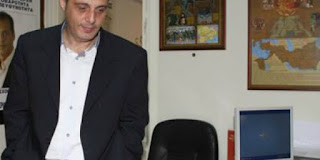 Comment of the President of the Greek Solution K. Î’ÎµÎ»ÏŒÏ€Î¿Ï…Î»Î¿Ï… for the reports in the German Press for mr. Tsipras…
‘New vilification of the Prime minister for the debt of the German press. Once again, the shadow theatre which defines itself as the Greek government emptied fat by the Germans and Merkel.
Then the beggar came in and dumped for the debt, tell their friends the Germans. The Î£Î¥Î¡Î™Î–Î‘ÎÎ•Î› have now lost my last shred of dignity.
Beggars of Europe for a while…pity!
Greece needs GREEK SOLUTION and no beggars pic.
The Greeks know how to REQUIRE and not to…Î•Î Î‘Î™Î¤ÎŸÎ¥Î!”