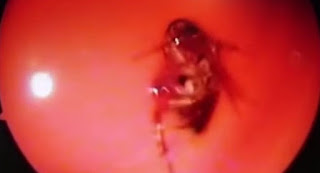 A woman in the…
city Injambakkam India arrived in the emergency room of the hospital Stanley Medical College in discomfort in the head, which came from a strange sensation that something was crawling inside of it.
And the feeling of the woman was not wrong, as a huge surprise, the doctors discovered that inside the skull, he rides a… a cockroach. The 42-year-old mentioned that “I was sure that some insect got into my head. Every time I moved it felt like something to “burn” between the eyes”. And it was logical that the “burning” feeling as the cockroach had lodged itself in the front part of the head very close to the brain.
The procedure followed by the doctors to remove revealed and the path that had the bug until it reaches the inside of the head: he came in through the nostril of the woman while she was sleeping.
The cockroach was removed from the skull live and the size impressed the doctors.