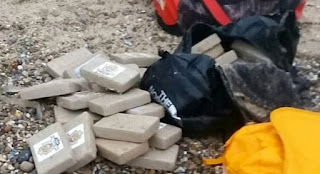 Twelve large…
bags containing drugs, a weight of 360 kg and a value of 59 million euro, came to the coast of the town of Northfolk on the southeast side of England.
The authorities have been alerted, as well as investigating an area of 15 miles, maybe find some clue as to how the bags of cocaine “washed up” on shore, while the version seems to be the most close to the facts this is how the bags got rid of (for some reason) traders moved through the North Sea.
Investigations revealed that there were other packages dumped in an area close to Northfolk. The particular region in Britain, as reported by the Daily Mail, has been described as “a dump” with citizens living on the poverty line and also as a region port for the drugs”