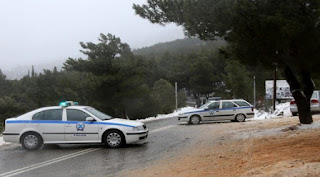 Cold and sleet of the morning in Athens…
The movement stopped, a little while ago, on the regional highway of Penteli, Nea Makri, due to snow.
In accordance with the Traffic police, the road has been closed due to the snowfall from the height of the street, Pan up to the Church of St. Peter.
The present backdrop of weather includes clouds with local rain in the lowlands, and sleet or snow in the hilly and mountainous in the island of Evia, in the east mainland and in Crete. The rest of the country sporadic clouds with local rain in the Cyclades and the Dodecanese, and sunshine to the Ionian sea and the west mainland. The night and the morning hours in the mountainous and hilly areas there will be frost in places strong.
The temperature will range from -1 to 8 and local 9 degrees in the central and east mainland, -3) to (9) in the north of Greece, from 1 to 12 and local 13 in western Greece, 0 to 11 in the northern Aegean sea, and from 4 to 12 and local 13 degrees in the central Aegean, Crete and the Dodecanese.
In the mountainous and semi-mountainous parts of the country the minimum temperatures will be in the range of 4 to 5 degrees lower. The winds in the Ionian sea blow from the east up to 5 beaufort, while in the Aegean it will be northeast winds up to 7 to 8 beaufort.