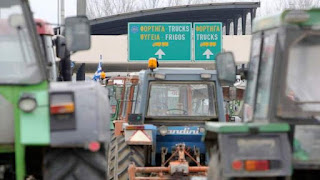 Can the negotiations between the Greeks and Bulgarians to…
continue unabated in the customs of the Rampart and of the Country, the Bulgarian-Greek border, but the situation remains the same for the third consecutive day today, with the drivers on both sides to remain locked.
As pointed out by the members of the coordinating committees of the Î¼Ï€Î»ÏŒÎºÏ‰Î½ in Bastion and the Country, John Î¤Î¿Ï…ÏÏ„Î¿ÏÏÎ±Ï‚ and Claus ÎšÎ±ÏƒÏ„Î¯Î´Î·Ï‚ respectively, “the Bulgarian side is asking us to withdraw the tractor from the points, and only then, will normalize the circulation. But that can’t happen”.
Indeed, they stressed that in their negotiations by the Greek side tabled the proposal to open customs for as many hours as you need in order to be discharged completely the movement and on both sides, which, however, as they noted “has not been accepted by the Bulgarian side”
“In discussions we had in the morning with the Bulgarian side, we were informed that, not only will not allow anyone entry on Bulgarian soil, but periodically will stop and those pedestrians will try to be found in the neighbouring country,” mr ÎšÎ±ÏƒÏ„Î¯Î´Î·Ï‚.
It is recalled that the customs, on Greek territory, the participants in the blockades, they give food and drinks to the enclaved, while the points are, and units, for the response to emergency medical incidents.