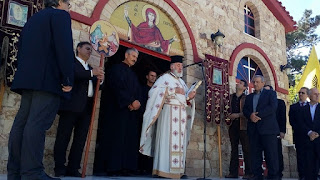 Sunday 17 July 2016 our Church honors the memory…
of the Holy glorious great martyr Marina, and celebrates the homonymous Holy Church in the ÎœÎ±ÎÏƒÏ„ÏÎ¿.). And this year will be given the opportunity to the faithful of our Metropolis, as well as the thousands of visitors from all over the Thrace, to worship the part of relic (a finger of the hand) and the miraculous icon of Agia Marina and to honour the sacred memory of, through the devotional sequences that have been scheduled for the eve and the day of the celebration of the memory of the.
Program Sequences
Saturday 16 July 2016
7: 30.m.: Great Great Vespers and Bread).
9.30 m.m.-1.00 p.m.: Churches Matins and evening Divine liturgy.
Sunday 17th Of July 2016
7.00′-10.00′ p.m.: A solemn Divine liturgy – Pontifical Ï‡Î¿ÏÎ¿ÏƒÏ„Î±ÏƒÎ¯Î±.
In the above sequences will be held by the Bse. His eminence our metropolitan mr. Anthimos.
6.30 m.m.: Holy Request in Agia Marina
8.30 m.m.-00.15 e.m.: Holy Vigil (Vespers, Matins and Divine liturgy
The life of Saint Marina
Agia Marina was born in Antioch of Pisidia, in the years of the emperor ÎšÎ»Î±Ï…Î´Î¯Î¿Ï… of B, 270 m.X. A few days after her birth, her mother died, and her father Î‘Î¹Î´Î­ÏƒÎ¹Î¿Ï‚, who was a Priest of idols, assigned it to a christian woman, from which the Marina was taught the Christ. When she was 15 years old, reveals to her father that she is a christian. Surprised that from what he heard, with hatred deleted it from his child.
After a while, she learned about the Marina and the governor ÎŸÎ»ÏÎ¼Î²ÏÎ¹Î¿Ï‚, who ordered the arrest for questioning. When he saw her in front of him, admired her beauty and tried to persuade her to deny Christ and become his wife. In vain, however. Agia Marina, every effort of the ÎŸÎ»Ï…Î¼Î²ÏÎ¯Î¿Ï… Î±Î½Ï„Î­Ï„Î±ÏƒÏƒÎµ the phrase: “I’m a christian”. Then the cruel governor ordered me to lie down on the earth, and the ÎºÎ±Ï„Î±Î¾Î­ÏƒÏ‡Î¹ÏƒÎµ ruthlessly with sticks so that the earth became red from the blood that ran. Then, while he was bleeding, he hung for a long time, and after the imprisoned.
Inside the prison actually happened: The devil transformed himself into a fierce dragon, he tried to make the saint to fear. This, however, prayed to God, and immediately the dragon’s changed form and became a black dog, and then the saint grabbed a hammer and hitting him on the head and the spine of the humbled.
When for the second time examined and found that the faith of Agia Marina was firm in Christ, burned her with lit candles. But the wounds of a miracle is closed, and this resulted in many attendees to become christians. In front of this danger, the governor finally decapitated in the Marina, so he took the imperishable wreath of eternal glory.
The holy relics were stored in Istanbul until the first conquest by the Latins, 1204.G., while according to other sources they were up to 908 m.X. in Antioch and then were transferred to Italy. Today, the holy relics of Agia Marina, are kept in Athens, in a temple bearing the name of the while the hand has been transferred to the Vatopedi Monastery on Mount athos. Also, part of relic (a finger of the hand) of Agia Marina is located Î±Ï€Î¿Î¸Î·ÏƒÎ±Ï…ÏÎ¹ÏƒÎ¼Î­Î½Î¿ from the 2102 to the Sacred Temple in the ÎœÎ±ÎÏƒÏ„ÏÎ¿.
The Metropolis