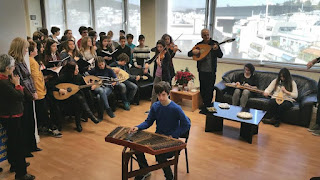 Carols from every corner of Greece were heard today in the offices of the… Region of Attica. Students from the Music School of Ilion, the Music high School of Pallini and the ÎšÎ•Î Î•Î‘ Horizons said christmas carols from Tinos, Kos, Mykonos, Peloponnese, in the district of. The Governor wished the children and offered them treats and gifts.
Later, the Governor visited the 12th high School of Acharnes, Olympic village, where he wished the students and their offered personal computers that were repaired and upgraded by the services of the Region.
Yesterday, the Governor had visited the 9th Primary School of Elefsina where he attended the feast that had been prepared by the students and handed out gifts.
These gifts, like all gifts that will be distributed during visits to schools and institutions in the Attica Prefect, not charged to the budget of the Region, as well as purchased with the compensation paid by the regional Governor of Attica, the former minister Argyris ÎÏ„Î¹Î½ÏŒÏ€Î¿Ï…Î»Î¿Ï‚, after his conviction, in September this year, for libel against her.