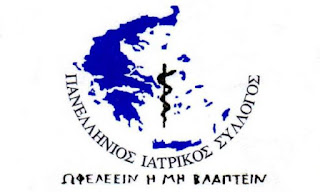 Read the announcement: “Meeting of Presidents of Scientific Bodies… will be held on Tuesday, 2 February 2016, at 12 m., the Economic Chamber of Greece (Mitropoleos 12-14) for the coordination of their actions against the plan of the government for the insurance.
The Panhellenic Medical Association and other Scientific Bodies hold to the position for withdrawal of the specific plan and invite all the scientists and ÎµÎ»ÎµÏ…Î¸ÎµÏÎ¿ÎµÏ€Î±Î³Î³ÎµÎ»Î¼Î±Ï„Î¯ÎµÏ‚ of the country to participate in the nationwide strike that have been generated by the GSEE and ADEDY on Thursday, 4 February.”