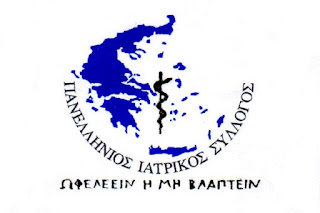 Took place on Wednesday at the offices of the Panhellenic Medical Association the first meeting, lasting two hours, the President of the AMA, mr Michael Î’Î»Î±ÏƒÏ„Î±ÏÎ¬ÎºÎ¿Ï…,…
Yen. Secretary mr. Dimitris Varnavas, the President of the Institute for the Study and Research mr Constantine Î‘Î»ÎµÎ¾Î±Î½Î´ÏÏŒÏ€Î¿Ï…Î»Î¿Ï… and the Yen. Secretary of the Institute mr. Panagiotis Î§Î±Î»Î²Î±Ï„ÏƒÎ¹ÏŽÏ„Î·, with the Presidents of the 14 sectors that make up the Institute for the Study and Research of the E.I. P.
The Institute of Study and Research, which was established by the law.4316 (24.12.2014) and started functioning with the appointment of the Board of directors and of the Executive Secretariat, will be an instrument of fundamental importance for the well-documented point of view at all levels that relate to the healthcare-education-insurance-modern medical operation, in order to be exploited by the State, in cooperation with the With.P.Y., for the establishment of modern rules, in accordance with international standards, which should govern the medical community, but also the care of the citizens.
The fields of the Institute are involved 150 accomplished scientists of all levels, which requires the modern know-how, in order for the medical scientific community to lead through the crisis at a time, with the fundamental rules that will create conditions for modernisation and development.
Participated in the meeting in alphabetical order of the Presidents of the sectors:
– George Î”Î±ÏŠÎºÎ¿Ï‚, Professor of Pathology, University of Athens, President of the Field of Therapeutic & Diagnostic Protocols,
– George Painter, Professor Of Surgery, If.Dean, President of the Field of Medical Education,
– John Î›Î¹Î¬Ï€Î±Ï‚, Professor Of Psychiatry, Chair Of Mental Health,
– Panagiotis ÎœÏ€ÎµÏ‡ÏÎ¬ÎºÎ·Ï‚ Professor-Pulmonologist, President Of The Public Health Sector,
– John ÎœÏ€ÏÎ¬Î¼Î·Ï‚, Professor Of Surgery, President Of The Greek Society Of Surgery, President Of The Sector For European And International Affairs,
– Miltiadis Nektarios, Professor of Economic University of Piraeus, former Governor of IKA, President of the Insurance Sector,
– Christina Papanikolaou, the former Yen. Secretary Of The Public Health, President Of The Field Of E-Health,
– Georgios Patoulis, President KEDE-I.P.A. President Field Of Medical Tourism,
– University of Î Ï…ÏÎ³Î¬ÎºÎ·Ï‚, Coordinator director of HS.Y. Hospital “State Of Athens, C.G. Gennimatas” Vice President F. I. D. I. P.A. President Field Of Hospital Care,
– Panagiotis Î£ÎºÎ±Î½Î´Î±Î»Î¬ÎºÎ·Ï‚, Professor of Anatomy, University of Athens, former President.P.Y., Chairman of the National Planning of Health Services,
– Anastasios Veracious Professor of Social Medicine, University of Crete, President of the Field of Social Medicine-Labour and the Environment,
– Nikos Î§Î¿ÏÎ»Î·Ï‚, Professor of Pharmacology, President of the Field of Medicines.
During the meeting, there was extensive discussion and exchange of views on the mode of operation of the field, the use of modern technology, cooperation with International Scientific Organizations and timely use of the know-how of each sector, so that the operation of the Top Health Organ of the State, such as the Panhellenic Medical Association, to have the ability of the modern perception, in order the State, through the institutional role of the Hellenic Medical Association to tap into opportunities that exist, and use many other countries around the world.
The official presentation of the operation of the Institute will be in early September, with the participation of the resources of the Institute and the presence of the representatives of Political, Social, Scientific community and Mass Media, in order to highlight the effort made in the direction of the promotion of new data, utilizing the expertise of the Î±Î¾Î¹ÏŒÏ„ÎµÏÎ¿Ï… potential of science, healthcare and economy of health in particular during this difficult period for our country.
We believe that this will contribute, in the best way, the requirements and the needs of the medical and in general the scientific field, but also the society.