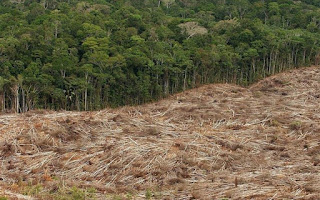 New laws under consideration by the government of Brazil is expected to cause a rise in the deforestation of the tropical rain forest, in spite of the severe drought, which already contributes to a great increase of destructive fires.
Last year in Brazil took place 235.269 forest fires, mainly due to the long period of drought attributed to climate change.
This number, which was confirmed by satellite data, represents an increase of 27.5 percent over the previous year.
These conditions favor the spread of fires, but human activity, either through negligence or intentionally, is still the decisive factor in causing them.
The situation has exacerbated the rise in the price of meat, which encouraged beef farmers to create new pastures and in wooded areas, as well as the reduction of policing, which was the result of a cut in the state budget.
The increase of forest fires contributed to the overall increase of deforestation by 16% in 2015. The Brazilian government has committed that it will eliminate illegal deforestation.
However, a large proportion of deforestation is technically legal, thanks to the changes to the forest code of the country, with two new laws are under consideration to expand even more this legal framework.
One of the two laws provides for the appeal of the ban on infrastructure projects in territories indigenous communities, with a return of 2% of the value of the project on local communities.
The second law simplifies the system of environmental permitting for large infrastructure projects, such as roads and dams.
The existing system requires a detailed environmental, anthropological and archaeological studies, as well as public hearings before the licensing of a project. Now many licences will be granted by the same companies who design the projects.
Studies show that most deforestation is carried out around these large projects, because they open up access to previously inaccessible areas.
In addition, the new year began with still more fires, with 999 fires are recorded in just the first four days of January, an increase of 85 percent compared with the same period of 2015.