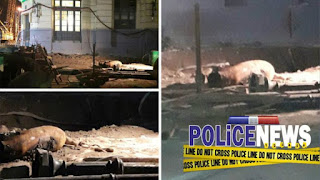 A shell fully oxidized was found early in the afternoon at a depth of 2.5 meters out from the…
terminal station of Piraeus to the point where they become projects.
The incident was immediately informed the EL.NES. which exclude the point for a long time, while late in the afternoon, a special detachment of the Army received it safely.
See the exclusive photos obtained by the Policenews before the removal of the…