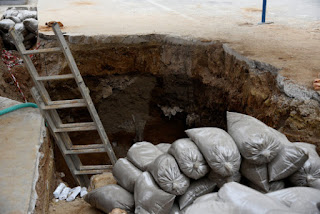 Of american origin was the bomb that was disabled a few hours ago in the area of Kordelio-Evosmos, Thessaloniki…
while according to the spokesperson of the General Staff of the Army, colonel Nikolaos Î¦Î±Î½Î¹ÏŒ, it was in very good condition, because when you fell to the ground, the area was a swamp.
The length is 1,5 metre and a weight of 275 lbs, while in the case of explosion, according to mr. Î¦Î±Î½Î¹ÏŒ, the fragments could kill someone if it was at a distance of 1800 meters. In case, moreover, beat on the excavator, during the works at the gas station, the situation, as he said, was different from that which we have today.
“It was an incident that it is customary for the Army. This was somewhat strange and eerie, is that it was within the urban fabric, and we had to take all these security measures that we took” noted the spokesman of the General Staff of the Army during a Press conference that was given in the Region of Central Macedonia, on the occasion of the end of the alarm company to disable and safe transport of the bomb. “At the airport “Macedonia” we have turned off similar bombs, but I didn’t have company on such a large area because it was open space. Were then exactly the same security measures there were just no houses, it was not within the urban fabric,” he added.
On the occasion, as he mentioned, what we have heard in the last week for excessive security measures, he stressed: “The Military plans in accordance with international safety standards and procedures provided by all the manuals of the NATO, the international and the EU, so that we can be 100% sure what will happen. We plan on seeing the worst case scenario. For this incident, with the charge that was there for the bomb that was there, these standards and the standards say that should be a circle with a radius of 1900 feet. These don’t make it back. We adhere to the principles and procedures that we have. On the other all made to perfection every time”.
For the bomb, pointed out that the outside is weathered, but stressed that he was worried the army was that the time fuse was in a very good condition, and this entailed more risks. “We prefer these mechanisms to see them killed or corroded in spite of this very good condition which was today. Nevertheless, it only took one attempt to do this it was successful, removed the striking lever, so everything went well,” he stressed.
Click4more: Kordelio – Live: Goodbye bomb! All clear – Return to their homes, residents
The neutralization of the group, Î½Î±ÏÎºÎ±Î»Î¹ÎµÎ¯Î±Ï‚ of the order of liquidation-mining land which has a group based in Thessaloniki, greece. Present in the operation was the commander of the Battalion from Athens, by order of the chief of the General Staff of the Army. The commander of the battalion, he supervised and coordinated the whole operation. “Our staff is trained abroad and can intervene in such cases. The process is designed in two phases, already finished the first phase, has safely removed the striking lever has been inactivated ammunition. From there I transferred to this area and there will be the final means of disposal that will not be a huge bomb explosion.
Not going to happen. There are procedures that will be followed and will be made on the spot, in the field,” he reported. For the enterprise to disable the bomb was used a special mechanism, or a combination of wired and wireless technology, it makes from a distance, the removal of the Ï€Ï…ÏÎ¿Î´Î¿Ï„Î¹ÎºÎ¿Ï mechanism.
Mr. Î¦Î±Î½Î¹ÏŒÏ‚ clarified, however, that the tax of blood this unit of the army is very big and he said for example: “from 1954, which has been founded, has mourn 31 dead. He has validated over 800,000 acres, more than 450,000 mines and 800.000 grenades”.
Addressing those who participated in business, featured excellent cooperation of the army with the Region, the municipalities, all the authorities of the Hellenic Police and the fire department.
“This action that you see is one of the social actions of the army and of the armed forces. At this time it is in the middle of a medevac patient from a secluded island. A helicopter of the army aviation already carries a patient. There are machines and personnel of the army who intervene at any time when there are natural disasters in the recovery of damages. The army actively participates and assists in the management of migration and the refugee problem, without all this to have no impact on the operational mission. We’re right where we need it at any time in the whole of greece. We execute our mission without discounts” added mr. Î¦Î±Î½Î¹ÏŒÏ‚.
Source: ana – MPA