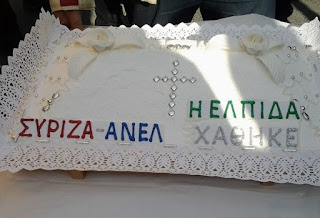 Farmers handed out at noon, the farmers in the blocking of Î‘Î½Î¸Î®Î»Î·Ï‚, a virtual memorial of hope that they had given pre-election SYRIZA and ANEL…
Hope lost pointed out by the farmers who see their future destroyed.
At the same time the farmers of the block, they poured milk all over the highway.
Watch the video: