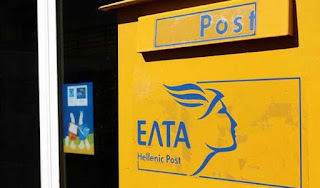 Immediate intervention and response of the Association of Couriers Athens, Prefecture of Attica, in an effort to reduce the …
jobs in distribution. Once in 3 weeks it will arrive to spend the summer in the mail.
The Central Distribution Unit of Peristeri, on the road Sofoklis Venizelos 67 and Miaoulis, have been ruled out by the morning workers of the distribution, expressing its strong protest against the plans of the Administration of the POST office to restrict the jobs of a postman. As a result it won’t happen today mail distribution in the wider area of Peristeri.
The Association of a Postman Athens, Prefecture of Attica reacting to the planned reduction of jobs by approximately 30%.
As mentioned by the President of the Association of Couriers Athens, Prefecture of Attica Yiannis Economou, “the reduction of the 30% that is promoted by the Administration translates into a corresponding reduction in the frequency of service to citizens”.
As pointed out, “it is an anti-labour, a unilateral, illegal and developmental energy that puts a tombstone at a Public Post office as it will result in a significant degradation of services in an environment of intense competition. Causes impression that a â€œleftâ€ government leaves open scope for further strengthening the individuals and do not support the public post office. We condemn the attempt to limit the positions of the distribution. We call for the immediate revocation of as well as can be applied in practice, and we call on the Administration in a meaningful, sincere and pragmatic dialogue to find solutions to the problems of the POST office
We sound the alarm about the impact of the cuts on the operation of the Public Mail, and in service to the public.
We warn the Administration and the Ministry that they will find us against any effort to discredit the Public Mail and the job of a Postman, who every day scour the country for the POST office to provide universal services, continues its social work and its historical trajectory.
The Club is planning the scaling up of ÎºÎ¹Î½Î·Ï„Î¿Ï€Î¿Î¹Î®ÏƒÎµÏŽÎ½ of workers. Tomorrow, Tuesday 5 July at 18.30 at the hotel Îovotel has scheduled an extraordinary General Assembly in order to take decisions for your next moves.