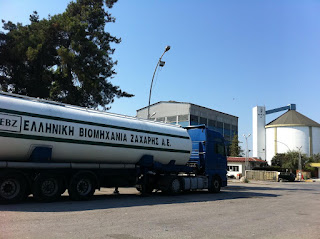 In the more difficult financial and business position of the 55Ï‡ÏÎ¿Î½Î·Ï‚ history is no longer the Greek Industry of Sugar, the…
next a small period of time is required to cope with problems related to the very existence of.
License funds, declining sales, accumulated losses, excessive debt and inability to finance creates an environment of extreme uncertainty for the future of the COMPANY, which at this time is uncertain, is located in the… air.
The big immediate problem that must be faced by the administration is the financing of working capital, something that looks extremely difficult. The drama of the moment is evidenced by the fact that in a few days set up an informal group of executives of the ministries of Rural Development and Industry and the vice-presidency of the government, who will deal with the financing of the company, for which the Greek banks “whistle dixie”.
Besides, the liquidation ATEbank, which is the major shareholder of the COMPANY, stated in writing at the recent annual general meeting of the company that it does not intend to refinance, as happened last March, through the issuance of a dubious compatibility with community law of an Act of Legislative Content.
It is worth noting that the developments around the COMPANY have been frozen for the last few months, as well as after the elections of 20 September in the company “is not moving sheet”. The alleged interest of a brazilian group for the production and marketing of sugar for the supply of raw sugar intended for the market of Europe and Asia doesn’t seem to have the time.
The coffers are empty, while the economic data are charged, since the first quarter of the current fiscal year â€“July, August, September 2015 – is injurious, while about 240 workers are concerned about the possibility of the payment of the next salary and Christmas bonuses. It should also be noted that the obligations of the COMPANY to the sugar beet producers from the last campaign, but carriers arrive at 13 million. euro and no one knows how and when they will be paid.
In the meantime, competition in the internal market of sugar is for the HSI ruthless and comes from companies hailing from France, Germany, Croatia, and domestic commercial businesses. As a result, daily, the HSI is losing ground. With a production of 25,000 tonnes of sugar and imports of the order of 100,000 tonnes only covers 38.5% of the market, with the presence of the Attica basin has subsided dramatically.
Source