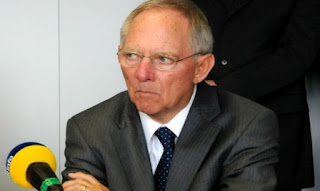 The Bild…
the occasion of the reactions caused in Greece, the recent statements by Wolfgang Schaeuble, has found occasion to draw his sword again in our country.
Specifically, under the heading “Fear of bankruptcy. The Greeks, stoking again the hatred against Schaeuble, the German journal publishes the following text:
“Reminds me of the hot days of the crisis two years ago. German Finance minister Wolfgang Schaeuble adorns the Ï€ÏÏ‰Ï„Î¿Î­Î»Î¹Î´Î± all of the Greek newspapers. The bankrupt country lingering fear of bankruptcy.
The reason for this is that the christian Democrat Finance minister Wolfgang Schaeuble has made it clear that the 86 billion. euro of the third aid package to Greece may be awarded only if the International Monetary Fund (continues to) participate and control the reforms in Greece.
From the crisis of 2015 have been given to Athens 32 billion. euro, only from the IMF didn’t come to anything. Because the Fund depends on the involvement of the if the Greeks can repay the debts.
But now it seems that the IMF is moving. According to data of the German ministry of Finance made an effort to be achieved quickly an agreement on the current aid to Greece. The Schaeuble and the head of the IMF Christine Lagarde discussed -among other things – on the sidelines of the world Economic Forum of Davos for the help to Greece. “There was a ÎµÏ€Î¿ÎºÎ¿Î´Î¿Î¼Î·Ï„Î¹ÎºÎ® conversation”. The Lagarde assured that the IMF will participate in the talks constructively and continues to seek “a rapid agreement for the full participation” in the program, “including resources of the IMF”.
H Journal of the Authors has the title “Caresses and slaps from Schaeuble and Draghi.
The New speak for “Ultimatum Schaeuble”. The threats of the German minister Financial: Program with the IMF or nothing. The (Greek) government is proposing a package of measures for ÏƒÏ…Î¼Î²Î¹Î²Î±ÏƒÎ¼”.
The Free Guy “sees Greece before a difficult decision. A memorandum with the IMF, or on the cliff”.
The Dawn speaks of a “Game SchÃ¤uble with IMF”: THE German Finance minister Schaeuble says that there is no program without the IMF a few days after opening the exit door at the IMF.
For the Nation, “Schaeuble threatens with sudden death: the IMF or nothing.
And for the Daily the Association is the number one on the front page. Ultimatum Schaeuble in Athens: “If he leaves the IMF, there will be a new financing programme for Greece'”.