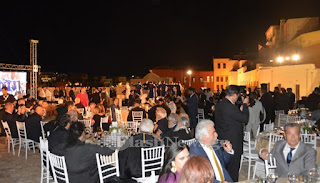 “God bless the ÎºÎ¿Ï…Î¶Î¿Ï…Î»Î¿ÏÏ‚ Cretans who made Crete immortal” – Photos and video from the dinner at the Firkas fortress, Chania…
A unique night experienced by about 600 guests at the dinner offered by the Greek-americans, of the Order of St. Andrew in the Firkas fortress on the occasion of the end of the Holy and Great Synod of the Orthodox Churches. Under draconian security measures, the Î ÏÎ¿ÎºÎ±Î¸Î®Î¼ÎµÎ½Î¿Î¹ of the Autocephalous Churches, the hierarchs and other invited guests went to the fortress which had been suitably formed. The event started with a prayer, followed by cultural events as shown in the program of the dinner. The Ecumenical Patriarch Bartholomew, in his address, spoke of a “miraculous results” and thanked all those who contributed to the implementation and success of the Session he said that the next Meeting should be in Crete.
Indeed, in closing his address he said:
“God bless the ÎºÎ¿Ï…Î¶Î¿Ï…Î»Î¿ÏÏ‚ Crete, who made Crete immortal”.

Taking the floor, the Archbishop of America, Demetrios, spoke of the “week of wonders” expressed in unity, and with open and free debate on the issues that dominated the work of the Session.
Greeting he addressed, and the Mayor of Chania Tasos Î’Î¬Î¼Î²Î¿Ï…ÎºÎ±Ï‚ who among others reported the following:
“…In the days we live in, dominated by the suspense of solidarity and peaceful coexistence, the appearance Ï†Î±Î½Î±Ï„Î¹ÏƒÎ¼ÏŽÎ½ and extreme perceptions, the outbreak of the selfish tendencies, the Orthodox Church remains for all of us a beacon of supply and brotherhood…. In the context of the work was, inter alia, that clergy and people, we are one, in a joint effort to address the multiple problems faced by our modern societies. Our ally in this joint effort should be the pursuit of unity and cooperation, regardless of political and religious beliefs, thus providing the antidote to fanaticism, and the “holy bread” in society….”
In the course of the evening, the traditional association of “Watchmen” dance ” pentozali.
Source