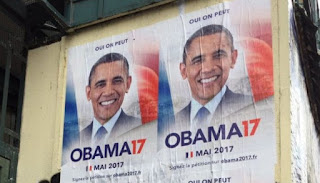 Posters of the former president of the united states Barack Obama have filled the streets of Paris, something that started…
as a joke from four friends, who pretended that started a campaign in favour of the candidature of the former head of the american state in the presidential election of France.
Even if Barack Obama does not legally have the right to stand as a candidate in the election for the presidential niche of France, as he is a national of a foreign country, the online collection of signatures organised by the four friends have already signed up more than 40,000 people.
The organisers, who thought all this while drinking beer, declare that opened the relevant website and began posting posters with Obama in Paris, because they are disappointed by the political figures who have stood for election in the presidential elections of France.