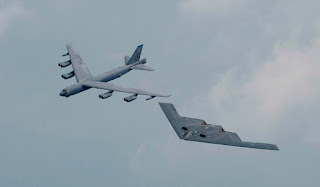 A few days after the test hydrogen bomb by Pyongyang, the united states sent a bomber B-52 to do…
“ride” in the airspace of South Korea near the border with North Korea. A show of strength and a message to Kim Jong-un…
A strategic bomber B-52, united states Air Force carried out, on Sunday (10.01.2016) flight at low altitude in the airspace of South Korea in a show of force after the nuclear test, which moved North Korea on Wednesday.
The bomber made a pass over the air base Osan, 70 km. south of the border of North and South Korea.
The strategic bomber, which can carry missiles with nuclear charge and the base of which is Guam, accompanied by two fighters, one american and one south Korean. After the flight returned to Guam, as defined by the u.s. army in a statement.
“The flight demonstrates the power and capabilities of the alliance,” said lieutenant general Curtis Î£ÎºÎ±Ï€Î±ÏÏŒÏ„Î¹, head of the american forces on the territory of South Korea.
Source: ana – MPA