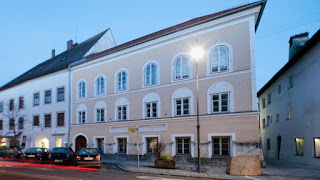 The demolition of the house in which he was born Adolf Hitler examines the austrian minister of the Interior Wolfgang Sobotka, in order for this not to happen …
a place of pilgrimage, or a monument to be visited by neo-nazis.
The ministry leases the house from the owner since 1972 and up until 2011 it had installed there a Workshop for People with Special Needs. He pointed out that they have failed in all the attempts of understanding with the owner as to the possibilities of the use and sale of the house.
The demolition of the building â€œwould be the cleanest solutionâ€, considers the minister, the representative, however, clarified that this support is a personal opinion and should be considered if something like this can legally be implemented.
After the failure of the negotiations for the sale of the house by the owners of the official state, the right of ownership will be transferred now to the Austrian Republic by means of attachment, for which in the federal law that will be voted on after the assessment and the relevant procedures, will be provided for the payment of appropriate compensation.
This would give an end to the legal dispute between the state and the owner, who had started from 2011, with the house still from when vacuum.
The only item that connects you with the past this house in the small town of ÎœÏ€ÏÎ±Î¿Ï…Î½Î¬Î¿Ï… am In the land of Upper Austria, is a marble slab from the nazi concentration camp ÎœÎ¬Î¿Ï…Ï„Ï‡Î±Î¿Ï…Î¶ÎµÎ½, which was placed in 1989 out of the house the municipality of the city, engraved with the message â€œNever again fascism. In memory of the million dead.â€
Every year on the birthday of Hitler, organized anti-fascist demonstrations in front of the house, however this does not prevent, on the other hand, the followers of nazism to appear in the course of time, at this point, for it is a journey.
In the context of efforts to rid the city of the black spot of the â€œbirthplace of Hitlerâ€, the municipal council had unanimously decided six years ago to revoke the title of â€œhonorary citizenâ€ that had reportedly given to Hitler in 1933.
Source