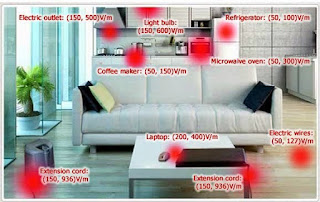 Mobile and cordless phones, wireless networks and electrical devices that we use every day are many and obvious benefits, But the exact possible damage is still undefined, the questions are many, and understandably there is a lot of concern, both in the scientific community, as well as citizens.
Every day we are exposed to every kind of radiation, natural or of human origin, whether we are indoors or outdoors. We are exposed to the earth and cosmic radiation, and the most important in the radiation of the sun.
In addition, there are radiation emitted by all kinds of electrical and electronic devices. Mobile phones, cordless phones, WiFi devices or Bluetooth emit electromagnetic radiation or electromagnetic fields.
The radiation that surrounds us is divided into ionizing and non-ionizing. Ionizing radiation (x rays, gamma rays) are known to be dangerous to humans, while the biological effects of non ionizing is not known, and thus can not assess the risk.
The energy emitted by these devices is non-ionizing radiation, which means that it does not have the ability to cleave chemical bonds, i.e., does not cause DNA damage, which is a possible cause for the appearance of cancer.
Although the electromagnetic radiation may not cause immediate damage, it can indirectly create problems, especially after long-term exposure.
How the electromagnetic radiation affects the body
The temperature rise is the main biological effect of electromagnetic fields. This phenomenon is exploited in microwave ovens to heat food quickly.
The levels of electromagnetic fields to which it is exposed, the man is very much lower than those that can cause a significant increase in the temperature.
Scientists are investigating the possibility of effects on the increase of the temperature, even below the threshold, as a result of long term exposure.
What are the consequences of electromagnetic radiation on humans
For several years there has been a lot of concern about possible harmful effects of electromagnetic radiation and for this reason many studies have been done, but which end up in opposite results.
Some of these show that there is an increased risk for cancer of the brain and of the skin, leukemia, infertility, memory loss, headaches, insomnia, and depression.
On the other hand there are several studies that conclude that there is some correlation between electromagnetic radiation and diseases that have been implicated.
The World Health Organization concludes that in accordance with the current data and research there is not sufficient data to substantiate the increased risk, however emphasizes that additional research is needed to draw firm conclusions.
If the landscape is still hazy about the hazards of the devices, it would be good to take all our measures, so we don’t face any nasty surprises.
Some simple guidelines which if we follow them it can save our health, according to the iatropedia, is the following:
Avoid the use of mobile phone in areas with low signal (because then the Î·Î»ÎµÎºÏÎ¿Î¼Î±Î³Î½Î·Ï„Î¹ÎºÎ® radiation has a higher intensity) and in enclosed spaces with lots of metal surfaces: ii.x. car, an elevator (reflection of radiation)
The best way to talk on the cell phone is to have it on loudspeaker and there is a distance from the brain. Otherwise you prefer to talk with a wired headset. If it emitted some radiation, it’s better, because you remove the cell from the body.
Try to generally reduce the hours that you are talking on the mobile phone.
Don’t you have your mobile phone close to the brain, the heart and the genitals.
Replace the wireless home phone or work with a wired.
Avoid the many wireless devices in your house (e.x. phones, intercom systems, network, internet, Bluetooth devices, speakers, etc.)
Turn off all devices when you go to bed (computer, phone, etc.). The same applies for the wireless router.
The wireless router is preferable to be mounted in a room that’s not used much.
Avoid charging your mobile phone right next to where you sleep (protect especially your head)
Step away from the microwave when it’s active.