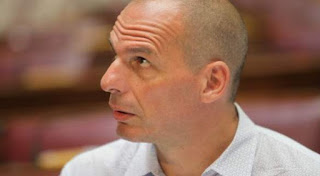 Who were the informants, Yanis Stournaras for the raid on the Mint, and why not inform the secretary of the Treasury and the government? These questions formulate the Yanis Varoufakis…
The former Finance minister has passed in counterattack, after the statements of mr Stournaras that he had information about a plan “invasion” of the u.s. Mint. In a statement, mr Varoufakis asks you to know why I haven’t updated and causes the governor of the Bank of Greece to declare publicly whether he means that these designs were made by the minister of Finance, the Prime minister and/or other financial staff.
The whole announcement of Yanis Varoufakis
“With interest I read that the Governor of the Bank of Greece (Bog) had information that some, apparently stupid, planned “invasion” of the u.s. Mint. I wonder who were those people and why the specific informants of the Commander, but he himself, considered it appropriate not to inform on this to the Minister of Finance and the government. (Unless he means, so I challenge him to declare publicly, that these plans were drawn up by the Minister of Finance, the Prime minister and/or other financial staff.)
As for the informal double coin, it is worth noting that this is exactly what our country has today! According to the decision of the Bog of 18 August (published in the Government Gazette) in accordance with which prohibited the partial or total repayment of loans (e.x. mortgage), with euros the customer has to the bank account of a resident but is allowed to cash or euro “external”. With this scandalous decision last August, the Bog launched a couple of euro:
A “Greek” euro, which remains trapped (due to capital controls on Greek banks, with which the greeks are forbidden to pay their debts within the country (even in their own bank).
And a “foreign” euro paper, or in a “foreign currency”, with greater value due to its ability to amortize the domestic debt.
As for the impact of the referendum on the banking scene, to remind you that the citizens ran to the ATM because of the referendum. Ran to the ATM because the Eurogroup and the troika have decided to punish the Greek people with capital controls because, hear-hear, dared to elect a government that raised the hateful an ultimatum of the Eurogroup of 25 June to the crisis of the Greek people.
I’m glad you revealed who designed, orchestrated and imposed the capital controls. In the beginning was the unprecedented in the annals of the central bank “notice” of the Commander, in early December 2014, for a lack of liquidity that would occur (meaning, if you don’t ÎµÏ€Î±Î½ÎµÎºÎ»ÎµÎ³ÏŒÏ„Î±Î½ mr Samaras), which “notice” has confirmed how easily can the central banker of a country to trigger an exit of deposits from banks (bank run). The baton took mr. Dijsselbloem-who in the first meeting (30 January) threatened openly that non-compliance in a miserably failed program of the troika could trigger closure of the banks. Days later, the ECB withdrew the waiver in order to intensify the insecurity of depositors. Then, executives of the ECB, and himself the Governor of the Bog, has been pushing for the introduction of capital controls as a remedy of the bank run they had begun.
Finally, of interest is the identification of the central banker’s view Schauble-Dijsselbloem, which today condemns the whole of the progressive Europe, that the rejection at the polls of a program of fiscal policy has failed miserably “was not consistent with the eve of the country in the Eurozone”