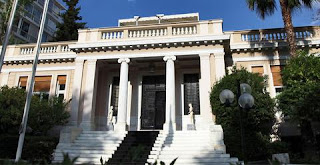 Attack in SW unleashed the Press Office of the Prime minister to comment that issued it. The comment says:
1. The SW proved unteachable. We repeat, therefore, that the administrations of the banks, that’s right, don’t appoint no government and no prime minister. The past of the relationship and the ÏÎ¿Ï…ÏƒÏ†ÎµÏ„Î¹Î¿Ï ended definitively and irrevocably. And he can’t come back.
2. The SOUTHWEST continues to not find a single word for the IMF. It’s obvious, now, that it adopts the line of the Fund for hard-to-measures without any negotiation. For mr. Mitsotakis, the “national line” is synonymous with “chair”…
3. With regard to the “10 examples” inform mr. Mitsotakis, for it is not exposed
– How the tender for TRAINOSE, which was launched by the FUND during the government of ND â€“ PASOK, was declared barren and there has never been a proposal to 300.000.000 euros.
– That in the toolbox of the OECD, of which the full application asks for, is, among other things, the graduated taxation of Î¼Î¹ÎºÏÎ¿Î¶Ï…Î¸Î¿Ï€Î¿Î¹ÎÎ±Ï‚, which a few days ago bound that will remove.
4. Finally, we repeat the warning, yesterday in Parliament, the prime minister, mr Mitsotakis that “asking for elections, while not closed, the evaluation, or recklessness or useful idiocy”.