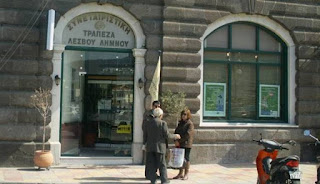 The Council of the court of Appeal of North Aegean refers to the category of infidelity to a degree felony, executives of the… liquidation of Cooperative Bank of Lesvos – Limnos, involved in the first scandal was revealed, and it involved illegal lending height then more than a million euros.
It is a case of 2004, for which trial members, then the board of directors of the bank, the then director and the then in charge of the management of cheques. Also for inciting the infidelity referred to two natural persons.
It should be noted that beyond the specific case reaches the courtroom, the same or other persons are accused, and for a range of other offences for which they have been left free on probation. Be noted that the Lesvos – Limnos Cooperative Bank went into liquidation in 2012, together with the Achaean Cooperative Bank.
IN PELOPONNISUS
In the meantime, the National Bank is expected to pass, in accordance with information, the deposits of the Cooperative Bank of Peloponnese, which has failed to gather the required capital for its recapitalization.
According to sources, the supervisory authorities, the total of the deposits of cooperative bank is completely secured.
The deposits of the Bank of Peloponnese amount to 99 million. euro. The rest of the piece of work of the bank will be driven into liquidation.
Meanwhile, an extension by the end of the month gets, as everything indicates, the Pancretan Cooperative Bank, in order to cover the capital needs under the adverse scenario.
With regard to the rest of the cooperative, Cooperative Bank of Chania and the Continent have covered their capital needs.
Source