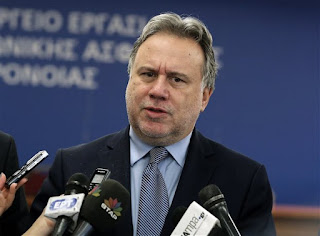 The major theme of the labour will come from the Sunday to the table of negotiations between the minister of Labour George ÎšÎ±Ï„ÏÎ¿ÏÎ³ÎºÎ±Î»Î¿Ï… and the representatives of the…
institutions. The first meeting has been set for the afternoon, with mr ÎšÎ±Ï„ÏÎ¿ÏÎ³ÎºÎ±Î»Î¿ to indicate that the government has the guns for the
return of Greece to the european social model and the european regularity.
“Exactly, because our european partners are aware of the issue and they know it, and what is the european social model, we have already received significant support from the European Parliament, but also in the context of the Council of Ministers. Further, the Report of the Independent expert is very close to our seats and there is the joint declaration of the social partners, which proves that even the employers in Greece, they are not concerned about collective redundancies or for lock-outs, which are on the agenda of the extreme ‘players’ of the negotiation,” says the minister of Labour to ana-MPA.
At the same time, considers that it will ultimately achieve a reversal of the employment deregulation and the return of individual and collective labour rights of workers, “this does not mean that it is one easy trading, just because there are the extreme views”.
“It’s a negotiation which, without it being easy, I think that in the end will significantly improve the existing situation, which is a job jungle” comments mr. Katrougalos.
As stated, the meeting on Sunday will lay the foundations for the negotiation of the three issues (collective bargaining, collective redundancies and trade union act).
In particular, says that the first basis on which it considers that there is an obvious lack of agreement is the need to respect the legitimacy.
“As we have declared that it will respect the decision of the Court of justice of the European Union on collective redundancies, thus, it goes without saying that the other side will have to respect the decisions of the European Committee of Social Rights, which has already held, in the context of appeal by the ADEDY and GENOP-DEH, the Ï…Ï€Î¿ÎºÎ±Ï„ÏŽÏ„Î±Ï„Î¿Ï‚ salary of the young people, for example, is opposed to the european social charter. The second basis for discussion which, also, has become the subject of an agreement, and on the other hand is the finding of the Committee of Independent Experts. On the basis of these two methodological principles, we will discuss all the issues,” notes the minister of Labour.