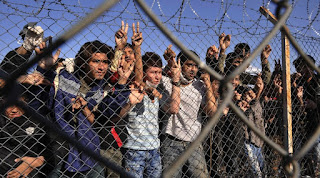 H massive entrance of immigrants and refugees in the Greek islands continues, the time that the situation in Eidomeni smell of gunpowder and the morning were five children in new shipwreck off the coast of the Aegean sea.
According to data presented by the newspaper “Daily”, is only worth mentioning that the first six days of December, 20.325 aliens had been in the Greek islands, most of the 18.444 that had passed throughout the May of this year!

The operation to return or to prevent a rise in Eidomeni thickens the population of immigrants housed in the stages that have been placed in Athens for hospitality.
Already yesterday in the TAE KWON DO Faliro were over 600 migrants, most coming from the Idomeni. Team of the Greek Red Cross distributed 700 packages of food, 500 blankets and 547 packages with items of personal hygiene. Yesterday morning, still 2.276 refugees disembarked in Piraeus, arriving on flights from Mytilene (1.700) and Chios (575). Mr. ÎœÎ¿Ï…Î¶Î¬Î»Î±Ï‚ pointed out in yesterday’s interview, that we need “to control the flow of refugees to the Turkish coast,” and that the “last fortnight we have a change in the flow, coming Moroccans and Iranians”. As regards Frontex, stated, “we want, but under the control of our own police”.