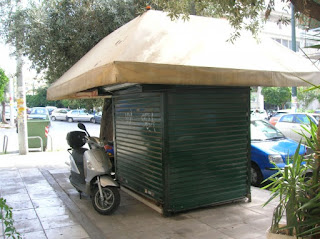 At a rate of avalanche closed the kiosks in Magnesia, due to the fact that the situation is extremely difficult, wages have not come out and the professionals prefer to close…
despite be charged. Already in the last five years lost 90 points of sale, from November closed three kiosks until the end of the month and of the year, it is expected two other professionals to be brought in unemployment.
The above mentioned the president of the Union of Professionals Î ÎµÏÎ¹Ï€Ï„ÎµÏÎ¿ÏÏ‡Ï‰Î½. Magnesia Claus Î¤ÏŒÏ€Î±Ï‚, who spoke at the magnesianews.gr is described in gloomy colors the future of the industry is extremely bleak. From the good period of 2004 and the Olympics, where at Magnesia there were 650 kiosks and tobacco species, and today, after 11 years in Greece of the crisis, left 250, which dwindle with mathematical precision. As explained, the tobacco products, which is the main volume of sales for a kiosk, they have zero percentage profit and â€“ due to crisis and taxation seven times in the last five years â€“ sales have shrunk significantly. Mr. Î¤ÏŒÏ€Î±Ï‚, last Weekend was the 47th Congress of the Î“Î£Î’Î•Î•, as a representative of the ÎŸÎ•Î’Î•Îœ, made a recommendation for kiosks and spoke of the fight against smuggling, for the persecution of the Municipalities, which Î¾Î·Î»ÏŽÎ½Î¿Ï…Î½ kiosks from public spaces, increased charges for the occupation of public spaces.
Rampant smuggling
The Claus Î¤ÏŒÏ€Î±Ï‚ featured rampant in the state from smuggling of tobacco and cigarettes, according to a survey of a European company Nielsen in Greece reached 30-40% in 2014 and is expected if you continue to exceed 50% in 2016, and if not taken immediate action.
The president of the Ï€ÎµÏÎ¹Ï€Ï„ÎµÏÎ¿ÏÏ‡Ï‰Î½, emphasized that the massive turnout of immigrants in Greece, the border that are not controlled and diminished control at the entry points of the country, contribute to the increase of the phenomenon of smuggling, migrants cooperate with the cartels for illegal cigarettes and tobacco.
In addition he mentioned that the tobacco products, there were seven tax increases in the last five years, with the result that many are turning to smuggled tobacco and cigarettes.
The Ï€ÎµÏÎ¹Ï€Ï„ÎµÏÎ¿ÏÏ‡Î¿Î¹ handed over a memorandum on the smuggling of the ministries of Health, Finance, Development, etc., pointing out that smuggling the state loses 700 million. â‚¬ per year and ask for tax reduction single consumption, so that people can buy from the kiosks and tobacconists and non-turns in the contraband cigarette and tobacco.
Source