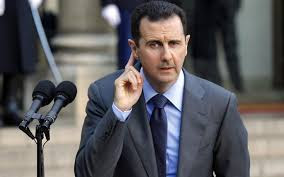 The airstrikes, which performs from Thursday the Britain against Ï„Î¶Î¹Ï‡Î±Î½Ï„Î¹ÏƒÏ„Î¹ÎºÎ®Ï‚ organization Islamic State in Syria are “illegal” and will…
“support of terrorism”, supported the syrian president Bashar al-Assad in an interview with the british Sunday Times.
“It will be harmful and illegal and will be providing support to terrorism,” claimed the syrian president in an interview published in the Sunday newspaper, referring to the damage for which authorised the night of Wednesday, the government the british Parliament. The interview was given before the parliamentary vote, the result of which was regarded as certain, however.
“They will fail again,” said Assad. “You can’t cut a part of the cancer. You need to remove it. This kind of business is like cutting a part of the cancer. Will make him to expand more quickly in the body”.
“You can’t beat them (the jihadists of the Islamic State) only with air strikes. You can’t beat them without cooperating with ground troops. You can’t beat them if you don’t have the approval of the people and the government,” he stressed.
The syrian president made a crack also the statement of the british prime minister, David Cameron for the “70.000 moderate syrian militants” to whom could build the coalition in the field.
“This is a new episode in the long series of classical farce of David Cameron… Where are they? Where are the $ 70,000 of moderates for whom is he talking? There are 70.000. There are neither of 7,000,” he said.
On the contrary, the Bashar al-Assad praises the Russian intervention in the country, which it terms “legal”, because it was the answer to a “request” on the part of the.
“How many ÎµÎ¾Ï„ÏÎµÎ¼Î¹ÏƒÏ„Î¹ÎºÎ¿Î¯ cores there are now in Europe? How many extremists you exported from Europe in Syria? The risk is the hatchery. The Russians have understood this well. Want to protect Syria, Iraq, the region and even Europe. I’m not exaggerating by saying that it protects Europe,” he said.
Asked about the possibility of a land intervention of Russian troops, the Bashar al-Assad replied that the issue “has not yet been discussed”, and added: “I don’t think we need this now because things are moving in the right direction”.
The Bashar al-Assad also kept the door open to a cooperation with western countries if it is “truly ready to help us fight terrorism”.
“If you are ready, I will welcome you,” he said.
“We are pragmatists. We want to settle the situation in Syria and avoid more bloodshed,” said still.
Asked if would stand for the presidency of his country, in the case of organized elections, he replied: “If there is a deal for such a process, I have a right to be a candidate, as well as every other Syrian”.
“My decision will be based, then, on my ability to act and will depend on whether you have the support of the syrian people,” he said.
Source