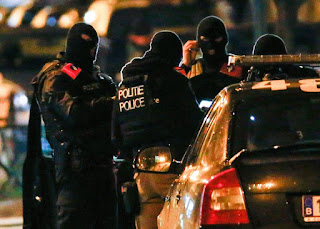 The authorities in Brussels have arrested…
22-year-old on suspicion he was connected with the investigation of the terrorist attacks that shook Paris on 13 November.
The belgian authorities have announced that this is the Ayoub B., noting that he was arrested yesterday in the district ÎœÏŒÎ»ÎµÎ½Î¼Ï€ÎµÎµÎº of the belgian capital, the area associated with many people believed to have links with the Islamic State. Is a Belgian, born in 1993 and he was arraigned yesterday in the course of an investigation.
“The investigating judge issued this morning a warrant for his arrest for terrorist murders and participation in activities of a terrorist organisation”, according to a statement the prosecutor’s office.
About ten mobile phones “tested” were seized during the investigation in the same house that he had investigated three days after the attacks of 13 November. Then the company had lead to a spectacular development of forces of order in the heart of the ÎœÏŒÎ»ÎµÎ½Î¼Ï€ÎµÎµÎº, where does the Salah Abdeslam and which was the gate of recruitment of many states Ï„Î¶Î¹Ï‡Î±Î½Ï„Î¹ÏƒÏ„Î¹ÎºÏŽÎ½ core.
In accordance with information of the public channel RTBF, “traces” of the passage of Salah Abdeslam, one of the main suspects who escapes, were identified in this first survey. The RTBF concluded that was hidden from them by their accomplices before the intervention of the forces of order.
The newspaper Het Laatste Nieuws reported today that the house belonged to a family of family of Salah Abdeslam, five members of which have left for Syria.
I don’t found no weapons or explosives during yesterday’s raid, said the prosecutor’s office.
In accordance with the belgian judicial procedures, the suspect would have to appear within five days before a judge who will decide whether to renew or not the detention.
This is the 10th person arrested in the investigation in Belgium for the attacks in Paris.
Source