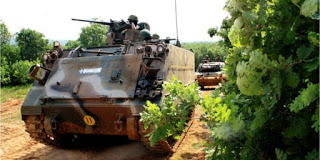 Near tragedy in Evros!
Armored M 113 by attempting to pass a water barrier on Î¦Î­ÏÏÎµÏ‚ capsized, and almost mourn the victims.
There has been a risk for the staff,who, thanks to the quick intervention of their colleagues was exceeded.
The circumstances of the accident will be investigated supports the militarist articles.
Until then, let’s continue to become dangerous exercises with live ammunition…
Until then, let us sacrificed the youth with the age-old american armored vehicles, the right crates…
Until then, it is considered the youth meat for the guns of the imperialist competition between Greece and Turkey for dominance in the Aegean and the Eastern Mediterranean.
Until the Outcome of yet another SAD cover-up and self-protection of the Prestige of the Army.
They could answer the following simple question:
after the Greek army is defensive, protecting the Defence of the country and the Territorial Integrity…
Then why the armored M-113 made a crossing of the river Evros it?
You go to the M 113’s?
He lost his way?
Come on, you know I have to finish the tale of the Greek ruling class that makes only defensive wars!
We just call it: “the exercises kill them”.
Anyone who is preparing for war because of the interests of the have need of both the war and the “national unity”.
Source