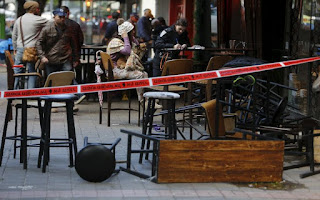 An armed man, identified by relatives as a member of the arab minority of Israel, killed two people opening today fire in the center of the…
Tel Aviv vs people sitting in cafes, and then escaped.
Images from security cameras show the perpetrator, who seems to be from 25 to 30 years old, wears black glasses and carries a backpack, looking for nuts in a health-food store, on the street ÎÏ„Î¯Î¶ÎµÎ½Î³ÎºÎ¿Ï†. Then he pulls from his backpack a automatic pistol and goes out to the sidewalk, where he starts shooting.
At least three other people were injured from the attack. As the suspect is still at large, police have refused to speculate on his motives.
“Examined all possible scenarios,” said the spokesperson Luba Î£Î¬Î¼ÏÎ¹, without extended. Large police forces carry out investigations to find him”.
The Nattie Î£Î¬ÎºÎµÎ½Ï„, owner of the neighboring bar Î£Î¯Î¼Ï„Î± where injured people who participated in the birthday party, told israeli tv: “it Was a terrorist attack, without a doubt”.
Sammy ÎœÎ­Î»ÎµÎ¼, an arab israeli lawyer, said that the perpetrator is a relative, whose father, who is a volunteer in the police, came to the authorities to recognize him after broadcast the images from the security cameras. The name of the 28Ï‡ÏÎ¿Î½Î¿Ï… suspect is not disclosed pursuant to a judicial order.
Speaking on Channel 2 of israeli tv, the ÎœÎ­Î»ÎµÎ¼ said that he has represented before the suspect in a case, in which was imprisoned for assaulting an israeli soldier. But the ÎœÎ­Î»ÎµÎ¼ described him as a mentally unstable, rather than as a man with fighting beliefs.
“This man is not sane, from what I know after the I represented,” said the ÎœÎ­Î»ÎµÎ¼. “It has been treated. Is on treatment. Recently she was roaming the streets like a madman”.
Asked if the suspect had radical religious trends, the ÎœÎ­Î»ÎµÎ¼ replied: “I don’t know”.
The Arabs, the majority of whom are muslims, make up 20% of the population of Israel. While broad support for the palestinian cause, it is rare to get the weapons against Israel or the jewish people.
So far there has been no claim of responsibility from armed palestinian factions for today’s attack.
Source