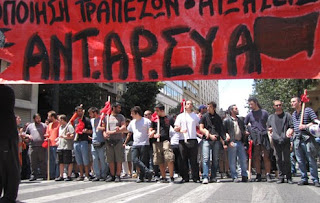 The government of SYRIZA-ANEL agreed within two minutes with the military, an armed solution to the refugee problem. Agreed to murder the refugees by putting between salvation and death, the weapons of NATO… yielding to a blackmail of the “enlightened partners” of the EU, this time for the exit from the Schengen treaty.
The ÏƒÏ„ÏÎ±Ï„Î¿Î»Î¬Î³Î½Î¿Ï‚, right-wing government partner of the “left” Glowing, as another Simitis thanked NATO and had the audacity to dedicate the agreement for the operational involvement of the fleet, in memory of Î±Î´Î¹ÎºÎ¿Ï‡Î±Î¼Î­Î½Ï‰Î½ of the naval helicopter that crashed during a military exercise.
So, the government, with the cooperation of the Ï€Î¿Î»ÎµÎ¼Î¿ÎºÎ¬Ï€Î·Î»Î·Ï‚ EU, goes the case a level above the defense of the inhumane fence of Evros, sending the message that, from now on, the barrels of the weapons of the “western civilization” will target the people who are fighting for their lives. The EU has already started to limit the democratic freedoms within its borders, and to outsiders, that is neither humane, nor civilized, nor compassionate, only and exclusively, inhumane capitalist.
The involvement of NATO will cause the escalation of the imperialist intervention in Syria and more widely in the region and of the hellenic competition between Greece and Turkey to the sea borders of the Aegean sea! Where there has been involvement of the NATO we never had peace, but provocations, “warm episodes” and military conflicts.
Against the cannons, hoist the flags of the solidarity to the refugees, to oppose our own common interests of the peoples of Greece and Turkey, to break down the “fortress Europe”.
Out NATO and all imperialists from the region, peace â€“ democracy â€“ co-operation of the peoples against the ruling classes, and in every oppression.
To fall off the fence in Evros – Free entry and exit of immigrants and refugees from the border.
Labor, class and internationalist solidarity to refugees and immigrants
Out NATO from the Aegean sea, out of Greece from NATO and the EU.