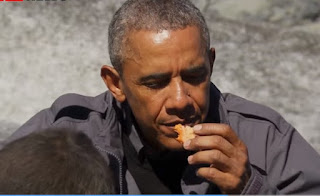 The worldwide subscribers of NBC will have the opportunity to see the Thursday, 17…
December the American president, Barack Obama, to kindle a fire in the outdoors and to cook fish next to a river, Alaska. This is the famous tv show “Running wild” guided the Bears Î“ÎºÏÎ¯Î»Ï‚, which has a term in the famous task force SAS, which calls the personalities in a risky game, out of their offices.
The president of the united states, don’t hesitate to test with the presenter salmon baked on a stone, which previously had Î¼Î¹ÏƒÎ¿Ï†Î¬ÎµÎ¹ a bear. The two of them drank water from the same canteen and ate berries from the forest.
Barack Obama is the first American president to participate in the show, and the communication staff, arrange for that episode, so that the guest with the host to observe and discuss together the impact the climate change in the region on the occasion of the dramatic shrinking of the glacier Exit, just 24 hours after the end of the world conference of UN on climate changes. “It’s one of the best moments of my presidency,” he says to the camera, president Obama.
“In principle, I’m not in the office, and secondly, I’m not wearing a suit”. Viewers at the beginning of the episode we see president Obama disembark from the presidential helicopter to the point of filming. He was accompanied by two transport aircraft which he was flying was his own personal safety. The trailer of the ÎµÏ€ÎµÎ¹ÏƒÎ¿Î´ÎµÎ¯Î¿Ï… is delightful
Source