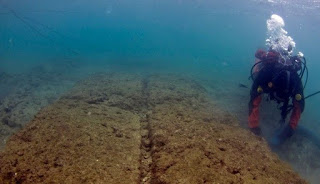 Important information public the marine archaeology in the Harbour of Piraeus. In particular, archaeologists from the Faculty of Humanities of the …
University of Copenhagen, together with Greek colleagues, claim that they discovered the ruins of an ancient naval base, which dates back to 493 bc.X. and was the “key” to victory in the Battle of Salamis. Awe is causing the naval base
As reported by the authors of the study at the University for the naval base, this had a huge fortification and space, capable of hosting hundreds of triremes (the famous warships), while it was very difficult to find as it was buried under the waters of the fishing and pleasure boats in the Marina Zeas. Archaeologists guided an elderly fisherman in 2010 when they indicated a point at which like a small child, he was fishing on top of an ancient column, part of this terrible port that now lies at the bottom of the sea.
â€œSome days the visibility under water was less than 20 cm. We really had difficult working conditions,â€ said the professor at the University of Copenhagen BjÃ¸rn LovÃ©n, who has led the group since 2001, was looking for ancient naval facilities in Piraeus.
â€œWe managed to track down six sheds, which protected the ships when they are not deployed at sea,â€ added the professor but it didn’t stop there, presenting numbers that is awe-inspiring. As said, the pillars that supported the hangars was 1.4Ã—1.4 meters, while the same sheds were 8 meters tall and 50 meters wide making it the naval base of one of the largest of the ancient world. The naval battle of Salamis
Scientists argue that this basis was the “key” to the battle of Salamis, when Greek ships under Themistocles faced the Persian forces of Xerxes in 480 bc.X. ÎºÎ±Ï„Î±Ï†Î­ÏÎ¿Î½Ï„Î±Ï‚ one of the most significant successes against the Persian empire. As support of two-thirds of the Greek ships participated in the battle were attempting from this naval base.
Archaeologists claim that the Athenian Democracy was based on the fleet that at its peak the Î¼ÎµÏÎ¿ÏÏƒÎµ 400 triremes requiring nearly 80,000 sailors who were patrolling the black sea when the Delta of the Nile, overseeing the 150 islands and coastal towns that belonged to Athens. Thus, as shown in the Zea Marina there was a huge war machine.
The construction of this naval base looks like it was ordered by the same Themistocles who ten years after the battle of Marathon he devised and implemented a defensive plan against the Persian threat was solely based on maritime power.
Source