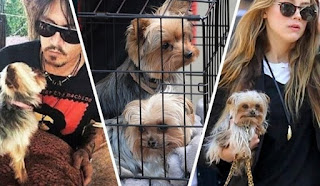 The wife of Johnny Depp, Amber Heard, will stand trial in April in Australia…
because he had brought to their country loved dogs, the couple, Pistol and Boo without having to have them stated at the beginning, today announced court of the state of ÎšÎ¿ÏÎ¹Î½ÏƒÎ»Î±Î½Ï„.
The american actress will appear before the australian justice for violation of the laws of quarantine that apply in Australia.
The trial was set to take place on 18 April by the court of justice of Southport, said the French Agency in charge of the court, who pointed out that the Herd is required to appear in court.
Johnny Depp was in Australia for the filming of the movie “Pirates of The Caribbean: Dead men Tell No Tales” in May when the scandal broke.
The minister for Agriculture Barnaby Joyce had launched then a fierce campaign against the beloved pet of Hollywood stars. “It is time for the terrier Pistol and Boo to leave and to return to the U.S.,” he said, then threatening them with euthanasia.
My two favorite terrier of the pair returned a few days later in the US, as they had come: with a private jet.
At that time the Herd had expressed the bitterness of the statements of the minister, condemning, without naming him, “members of the government” of Australia who won the “15 minutes” of fame at the expense of the couple.
Recently, however, she had put water in her wine, saying that it respects the australian law, and that will be presented at the trial.
In this will be invited to submit 12 witnesses, however, is still not known, if among them is Johnny Depp.
The Australians are very strict with regard to the quarantine measures imposed on animals from abroad in order to avoid the introduction into the country of diseases, especially rabies. For the violation of regulations relating to the quarantine of the australian justice may impose a sentence of up to 10 years.
Source