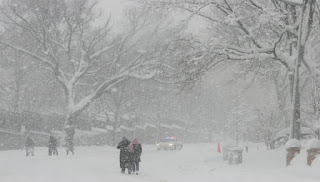 The big snow that already by meteorologists has “already been baptized” as the ‘THE BIG ONE’ will invade…
in Europe from 12 January giving powerful blizzards as pointed out in the website weather Greek-Weather.Org throughout the northern, central and eastern Europe even at zero altitude, while a strong polar cold front will spread across the european continent.
Parts of the cooling them but, and of this great snow, it will pass and from Greece after the next Weekend, affecting initially the north of Greece with snow, and later will reach as far as the central parts of the country with snow at very low altitudes.
Even the models predicting the weather are not clear on exactly which areas will it snow in Greece after the 15-16 January, however, as it stresses the Greek-Weather.org it seems to snow first in northern Greece on 15-16 of this month and then on 17-19 snowing in central Greece.
The first wave will affect for a few hours to the north of Greece only, while the second and stronger wave of snow will hit both the northern and central Greece.
Athens and Thessaloniki, greece is projected to see snow question remains how much will fall. However, several prognostic data indicate snowstorms in several regions of Greece, and that in and of itself means very rough winter scene
American forecasting models forecast but the website forecast weather Accuweather agree that a snow bomb is going to come from Europe, in Greece, giving enough snow even in the coastal sections.
With the prognostic data, it seems that the country will be hit by “THE BIG ONE”
The only certainty is that there will be areas with extremely low temperatures, even in -15 to -20 degrees Celsius.
of Theophrastus Î‘Î½Î´ÏÎµÏŒÏ€Î¿Ï…Î»Î¿Ï…
Source