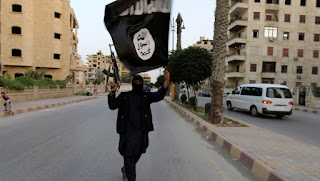 A 37 year old Iraqi who was traveling…
from Istanbul to Athens with one of the counterfeit passports that were stolen by fighters of the terrorist organization Islamic State (ISIS) from Iraq, was arrested yesterday at the airport El. Venizelos.
The 37 year old, who lives in Athens and is married to a Greek, argued that the controversial passport was received in Athens by mail, by sending the photo to a cousin, as he could not travel to Iraq to renew his passport, due to a restrictive condition prohibiting exit from the Country, which was imposed in 2008, for the establishment of a criminal organisation and trafficking in human beings by profession.
This batch of passports was stolen jihadists from Iraq. The Police had received information from the Directorate of International Police Cooperation, and as soon as he spotted the passport sounded the alarm.
Specifically, the Police have been notified that a large number of blank passports were stolen by the terrorist organisation ISIS from the civic center in the Iraqi province of Nineveh during June with the result that the blank passports of this series to have been cancelled by the authorities of Iraq, in order to avoid the holding of passports, and the infiltration of foreign fighters of ISIS in Europe.
O 37 year old, who was arrested when he arrived from Istanbul with morning flight, working as a clerk in a store, dining in Athens, and is co-owner, along with his two brothers, a company manufacturing furniture based in Kurdistan.
The reason I visited Istanbul as it was stated by the police was about to make a purchase of timber for the company as well as to meet his mother and one of six sisters.
Source