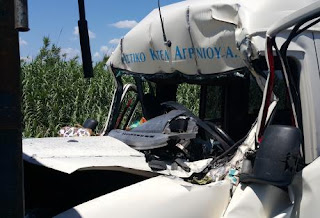 With traumatic brain injury, injuries to the chest and hands, in a condition of strong shock and bleeding, was transferred to the…
Hospital of Agrinio, the driver of the mini bus the Urban BUS station of Agrinio, which has become involved Thursday afternoon in a car accident on the.the Agrinio Antirio.
According to the latest information of the agrinioreport.com the state of the driver is progressing in a positive and does not pose a serious risk to the path of health. Remains in a state of shock, with Î¹ÏƒÏ‡Ï…ÏÎµÎ¯ concussion, traumatic brain injury and injuries to chest and hands, and the bleeding is now controlled.
Be noted that the driver was the most seriously injured of the nine who were transferred to the General Hospital of Agrinio.
Source