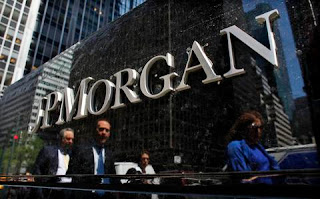 Agreement until July at the rate of 90%, the JP Morgan in its report on Greece. However, analyses the situation on the plywood IMF with B. Schaeuble and the entrapment of the Greek economy…
As stressed by the analysts of the american investment bank, the Greek government will need to accelerate the implementation of the Ï€ÏÎ¿Î±Ï€Î±Î¹Ï„Î¿Ï…Î¼Î­Î½Ï‰Î½, in order to complete the second assessment successfully.
The basic scenario remains the prospect of a compromise, with the government ” to implement the demands of the creditors.
The baseline scenario of JP Morgan remains the completion of the evaluation, with the Greek government to give in to the demands of the lenders, to remain in power and avoid early elections.

However, the probability has been reduced to 60%. As well as increasing the political cost of acceptance of the claims of the lenders, increases, respectively, and the risk of a government crisis and early elections.
The ideal completion date would be the 20th of February, before the Dutch elections of March, however for that to happen you have to be a quick acceleration to the actions of the Greek government in February. Recent events show that the deadline of February is quite ambitious.
In the next few weeks are expected Greece to make progress on the outstanding issues and also to provide clarity on relations between the IMF and Germany, so that at the next meeting of the Eurogroup to put a possible framework for the completion of the assessment before the middle of June.
However, early elections cannot be ruled out completely, as a result of German insistence on the participation of the IMF which increases the political cost for the government Tsipras. This can only happen if the government fails to pass the measures by the Greek Parliament. If this happens, early parliamentary elections in 2017 will be inevitable.