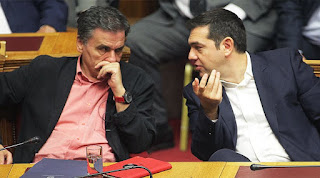 Athens sees the last 24 hours that the room for manoeuvre has narrowed dangerously…
The Commission has been exhausted to a large extent, the mediation of effort, without special effects (as evidenced by the visit, Moscovici in Athens) and the IMF remains data now in the Greek program, having the requirement for the adoption of new tough measures, the Greek government sees the last 24 hours that the room for manoeuvre has narrowed dangerously, the expectations for painless decisions to have been dramatically reduced.
The the Maximos Mansion hopes that the Eurogroup of Monday can be a first political agreement that will recognize a certain progress in the negotiations, however, this might not even have practical value, since the front of the lenders is a single and the place for taking measures 3.5 billion. euro, will hardly change.
The clear warning to Brussels that Athens improvement of the proposal of the institutions does not make sense (it’s not like the red wine, the assessment said a european official), along with the message that the lenders are not in a hurry, it brings all the dilemmas on the Greek side. This caused a bit of a shock I guess at Maximus, who has based his analysis on the view that the Europeans are in a hurry to close the Greek problem and to avoid remains open while evolving elections in various countries.
The government forced these days to make and one more folding: from the expectation that it will interfere with the Angela Merkel at the whole issue, and the assessment of the IMF is limited in a second role, if not to withdraw, too, now accepts the participation of the Fund in the program, realizing that in this matter the Europeans and especially Germany, and the Netherlands do not accept any change. The government spokesman Dimitris Î¤Î¶Î±Î½Î±ÎºÏŒÏ€Î¿Ï…Î»Î¿Ï‚ stated yesterday that the discussions are made for the participation of all in the program.
The government officials express a past you might hope that the IMF will revise its pessimistic estimates of the numbers of the Greek programme and thus the basis for the search of the measures that will be taken for the achievement of the fiscal targets will be greatly improved for the Greek side. At least that’s how interpreted the statements of Paul Thomsen that the Fund has no objection to reconsider their attitude on these numbers. Believes the Maxim that the review will happen much before April, published the data of ELSTAT, in order to facilitate a political agreement soon, and then a technical agreement.
In any case, however, the latest developments form a suffocating situation for the government. Even if there is now a basic political agreement, the procedures for the completion of all of the issues will be time-consuming and Athens just will catch up with the critical dates for the quantitative easing, the payment of the instalment by lenders and the formulation of conditions for the achievement of the millennium development goals, and maybe try it later, in time, exit in the markets.
On the contrary if you choose the extension in the negotiations, the risk begins to become large, by referring to the relevant warnings of the deputy minister of Finance, Giorgos Î§Î¿Ï…Î»Î¹Î±ÏÎ¬ÎºÎ·. In this case, a time point for an agreement is June, with adverse probably terms, after he runs to catch up to meet the loan obligations in July and the other (if you see that it has the ability of the country to pay, without the money of the ESM) in the autumn, after the German elections and with the hope that things have changed in Berlin.
Source