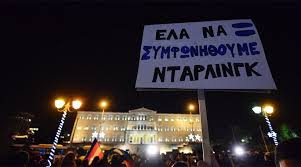 The Government of SYRIZA – ANEL not ÏƒÏ…Î¼Î²Î¹ÎµÎ¯ anymore. Yes to gay SYRIZA, not the LIFT. Not the Church, Yes, PASOK, the River and the Union Of the…
In this confusion of authority and bed came, and the Czech to tell us the news. We’re angry and we and we got the ambassador to show that we’re independent and we decide for our life.
Turn away and the Ï„ÏÎ¹ÏƒÎºÎ±Ï„Î¬ÏÎ±Ï„Î¿ IMF, and if I have to turn away and ourselves from this country. Don’t vote for the end of the ÏÎ¿Ï…ÏƒÏ†ÎµÏ„Î¹Î¿Ï and Î¼Ï€Î±Î¾Î¹ÏƒÎ¹Î¿Ï. The nature of our lives. The modern Greek history.
In the other, the independent Greeks, the proud Greek army guards the borders of Mytilene, where a few thousand to 8,000 so far, disembark daily and include some of the local vultures for the Constitution of Greece. If they stay a couple of days there and to occupy the island, smiling, selling a holding. What have the ballast and die?!
After all, who runs this place?
Whoever is ruled by the dictatorship of the Junta of Ioannidis, until today, the dictatorship of the starter to the transition to democracy. The minister with the forgotten 1.8 million euro. This cursed generation. The generation with the power of attorney bridging of selling off airports and ports, reduce pensions and loads taxes on the Greek people.
Elections and re-elections until we get mind. Until we become protagonists in Europe or to understand completely the Europe and become waiters, and laundresses in German hotels.
The most funny. The political love Merkel and Tsipras with Francois best man. The vast political love to the Greek Prime minister who sells out his country bits despite, airports, hotels, homes, banks what you get 1 euro, from an atheist and a follower of the Third way.
Don’t be a second round in the New Republic. The Old does not deliver the News. Only over the passionate body. Alexis will make her spiral in a timely manner.
Elections, universal starter and extending the suffering of an auction, of a people who glorified the bumpy democratic and legislative with only one unanswered question.
If you like it, and they all become Î±ÏÏƒÎµÎ½Î¿ÎºÎ¿Î¯Ï„ÎµÏ‚, who will give birth to the New Greece? The New Republic?
Maybe I’ll adopt it and this over the bodies of the foreign invaders?
Source